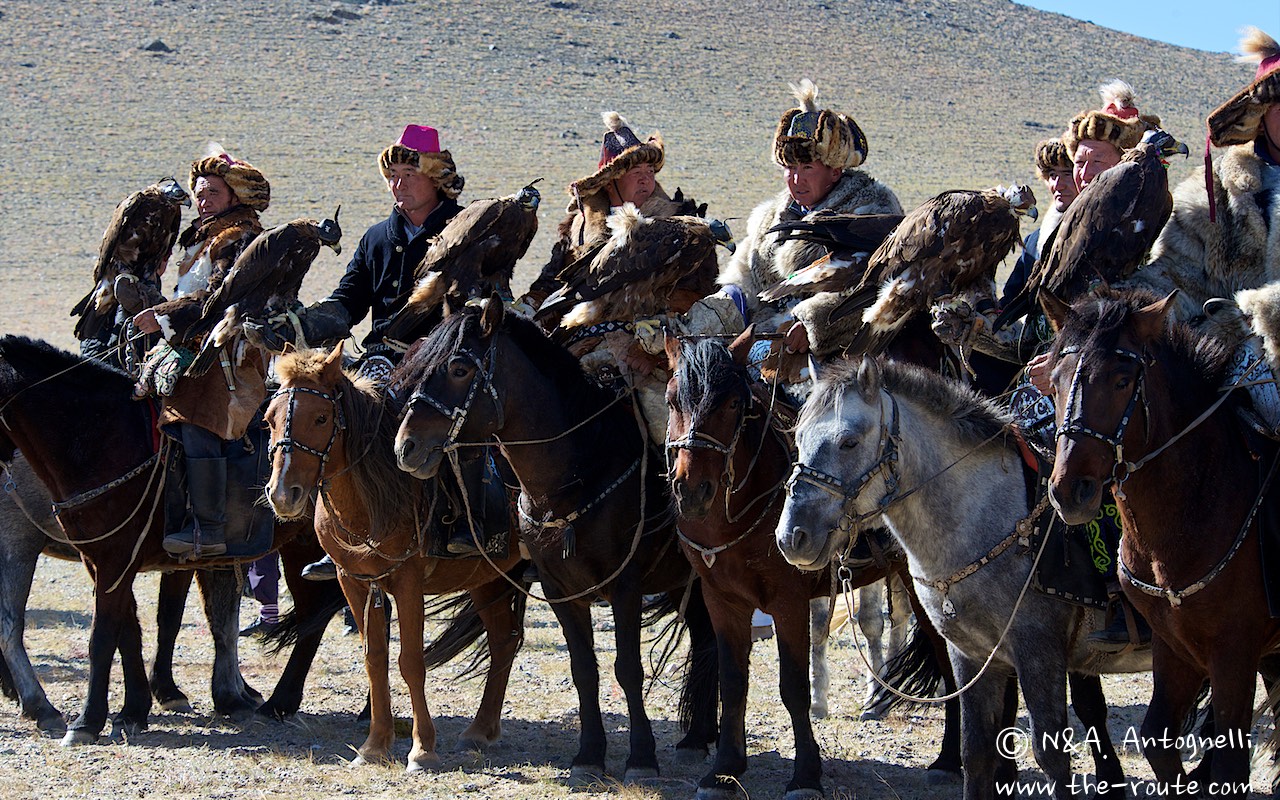 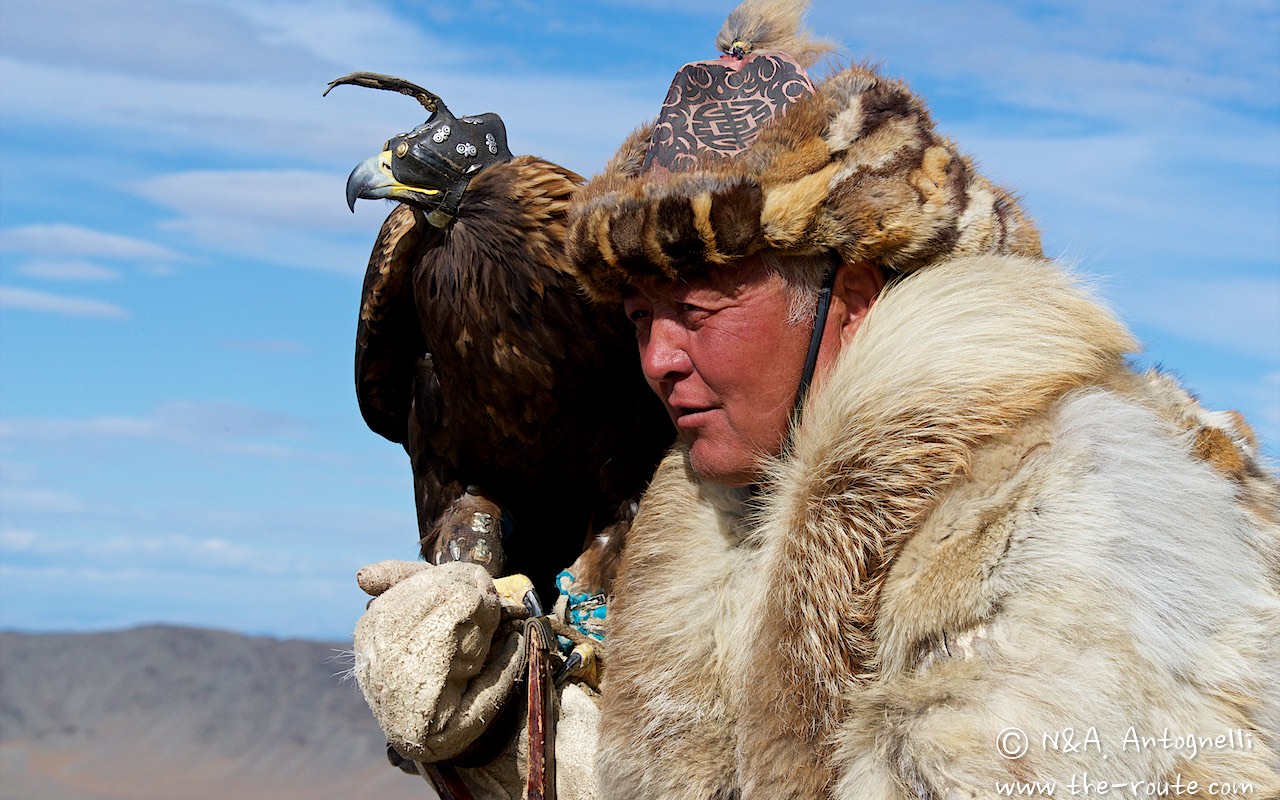 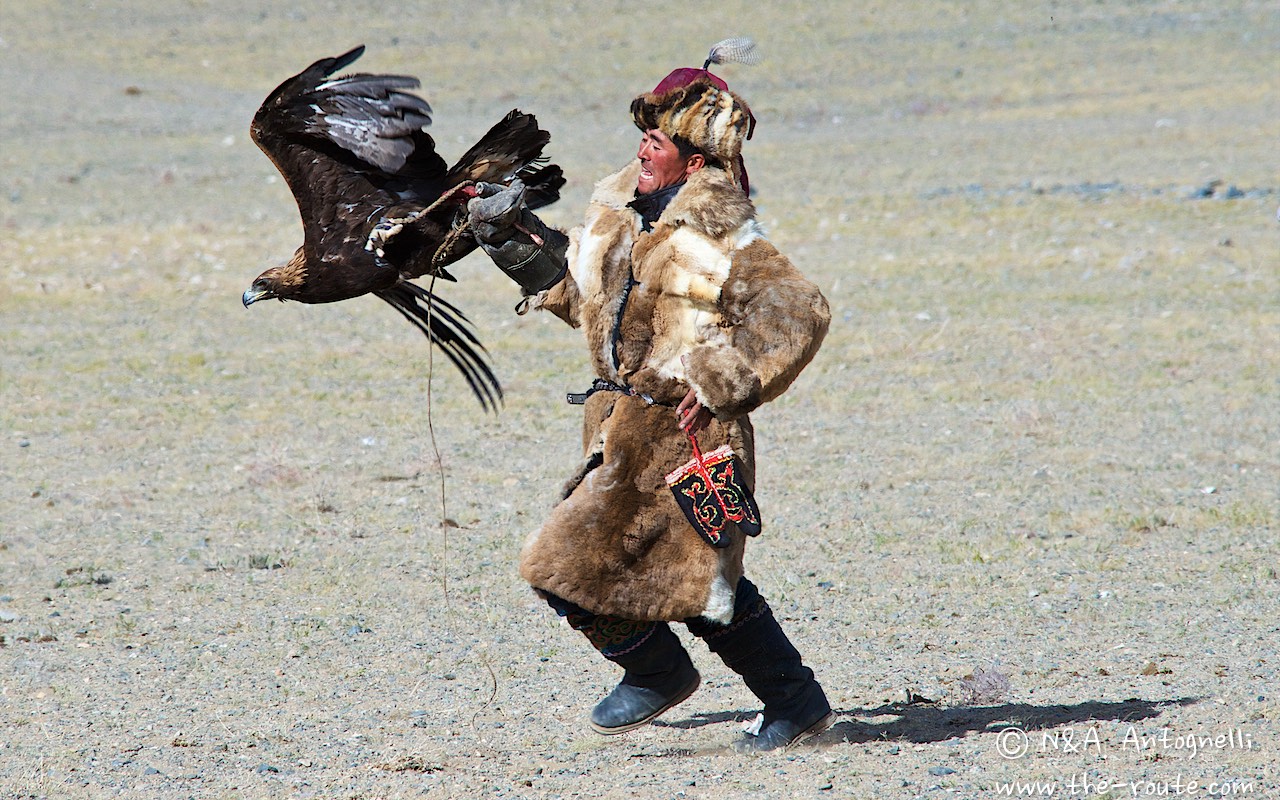 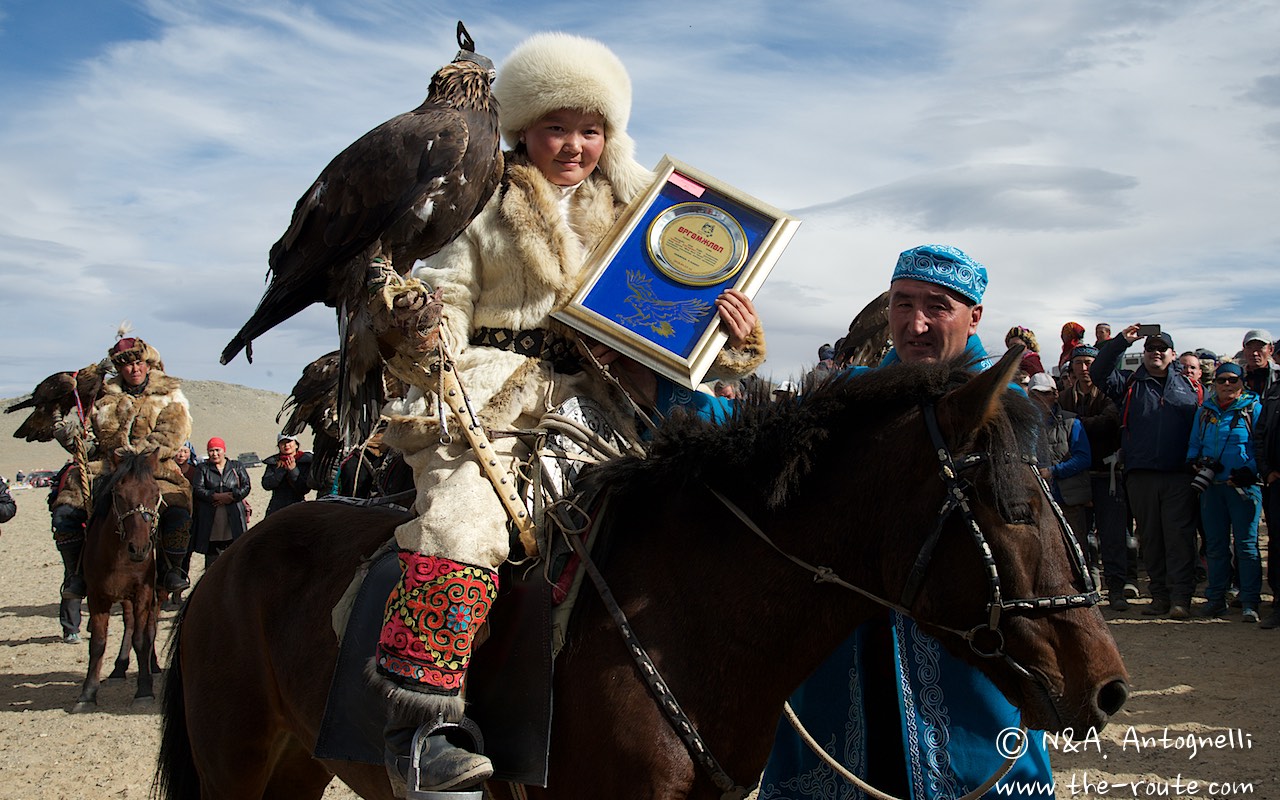 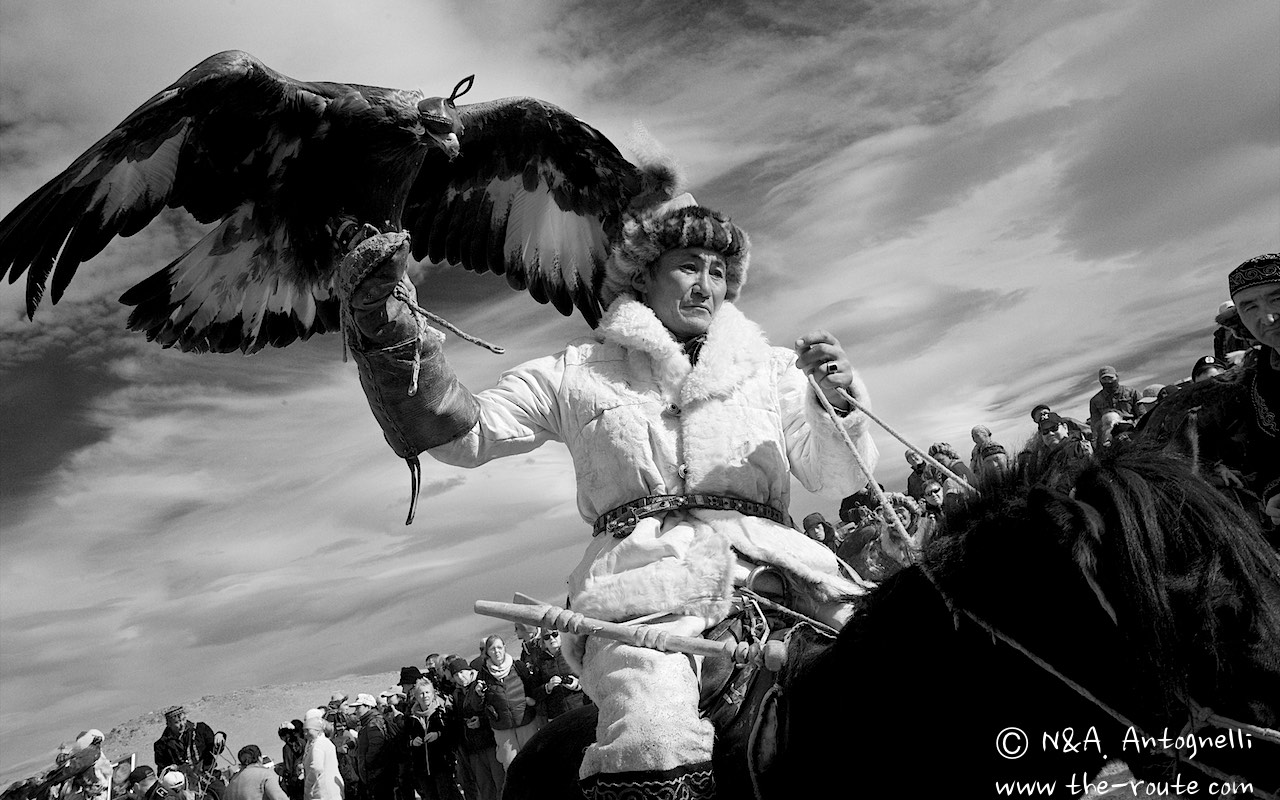 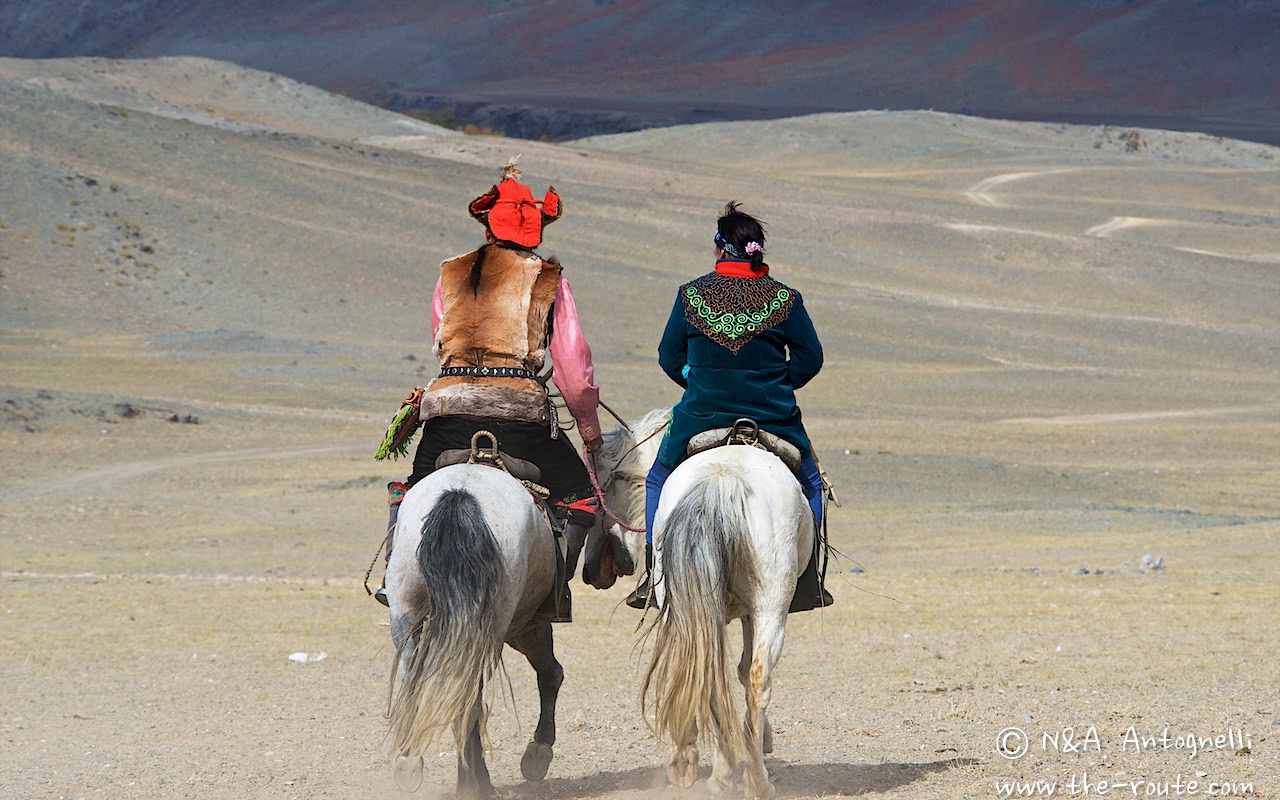 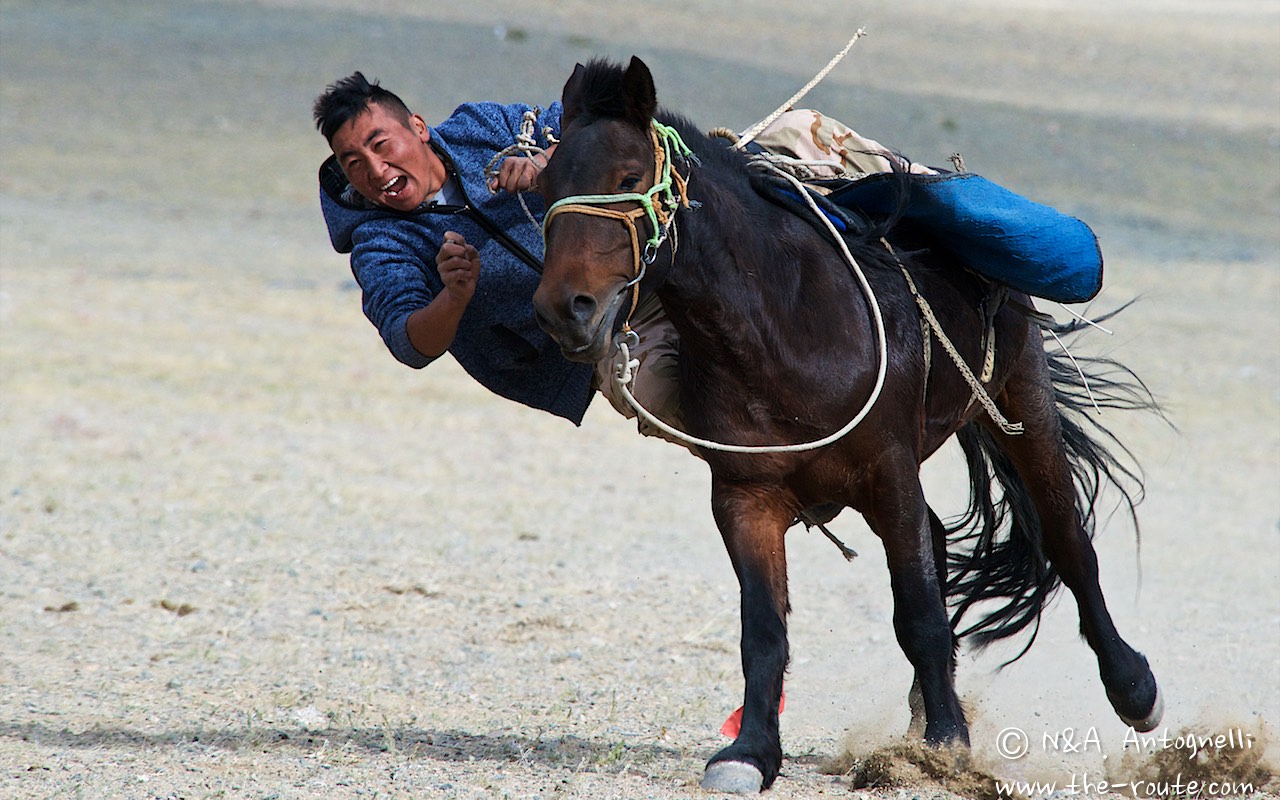 This festival of the eagle hunters is the first of the year. Nathalie noted the date on our schedule a long time ago, so that we would arrive in West Mongolia at the right time. The event that takes place near the village of Sgsaï is supposed to be the most authentic Eagle Festival, partly because of the limited audience that attends it.

The festival opens the hunting season in mid-September. Three days before the date, we cross the border and head towards the town of Olgii, in the Mongolian Altaï. It is not difficult to find a place to bivouac for the night, as the steppe is immense even near the city, but it is much harder to find out the precise location of the event.

As a precaution we make a quick visit to a tourist agency in the city in order to obtain confirmation and details about the festival location. A good initiative, because the meeting place has changed ! This year the event is held near the village of Altantsgts, in a sector that is totally different to the first.

After two hours spent on the tracks that make up the labyrinthine route, we arrive in the area. We still have to locate the precise zone of the event.

Finally, after gleaning information from several sources (often contradictory !), we follow a convoy that seems to go nowhere before reaching a plateau surrounded by small hills.

In front of us, vehicles are lined up alongside each other. We have arrived at the spot.

We are surprised to meet many tourists of all nationalities accompanied by tour agencies from the capital. Among them are many photographers equipped with profesional equipment.

There are also many Kazakhs ; this Turkish-speaking people from the province of Bayan-Olgii is already present. All nomad families come from far away ; for them, this is the opportunity to meet, to exchange and to have fun after a summer of hard work.

As often on such occasions, the program is only theoretical and the first event begins more than an hour late. But what is a delay for these people whose daily life is punctuated, season after season, by the vagaries of nature ?

The hunters are wearing their traditional clothes for the occasion. Astride their mounts, a golden eagle on one hand, they are an truly imposing group. I forgot to mention that the type of hunting that is practised in this region is completely atypical, since it takes place exclusively on horseback.

The eagle hunters prefer female eagles, who are bigger and stronger than the males, weighing up to 7 kg for a wingspan of more than 2 meters. The hunters procure their birds by removing the babies from the nest or by ensnaring larger birds in a net. The prey are usually foxes, whose golden coat is easily spotted on the snow. Hares and wolf cubs are also hunted.

But today, to spare sensitive souls and to ensure a fair competition, each rider drags a dead rabbit behind his horse. At the rider’s signal, a teammate posted with the eagle on the heights above removes the bird’s mask. The eagle is then judged on its speed taking flight, its tracking skills and the speed with which it reaches the hunter’s glove.

We also witness the astonishing « bushkashi » event where, in a tournament of two, the Kazakh riders compete to place a sheep carcass behind the goal line. The sometimes chaotic spectacle often ends in open scrums in the middle of the audience.

The meeting is held over two days with other events and entertainments, all in a good atmosphere.

We have one regret, however: the obvious mercantile side of an event said to be private and authentic ; it costs between 30€ and 50€ to attend this type of meeting. The difference is that Olgii or Oulambator attract even more people from far away These sums, which are acceptable in Europe, are totally out of sync with the cost of Mongolian life, which may eventually see this tradional form of falconry transformed into a circus show where authentic hunters are converted into entertainment professionals. But, you may say, is this really a surprise in a world where on all continents, manners and cultures are shaped for the benefit of tourism ?