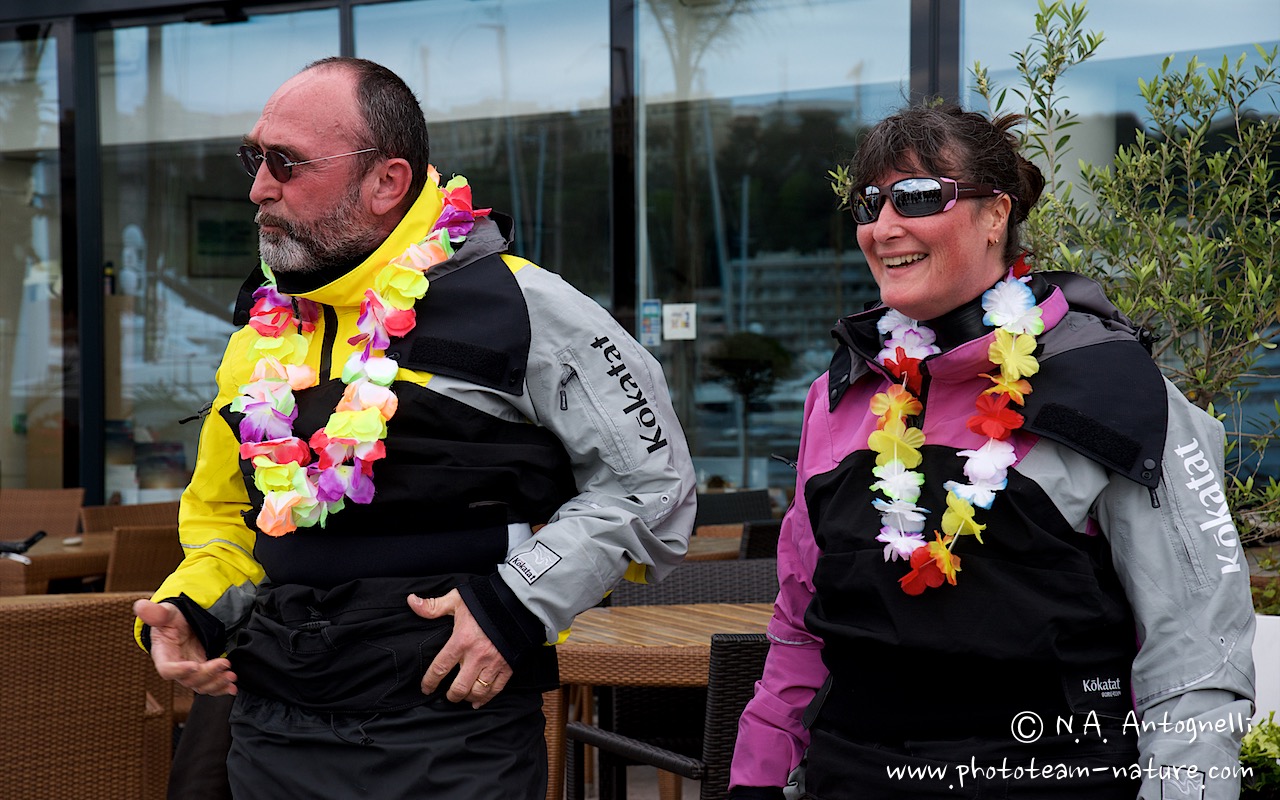 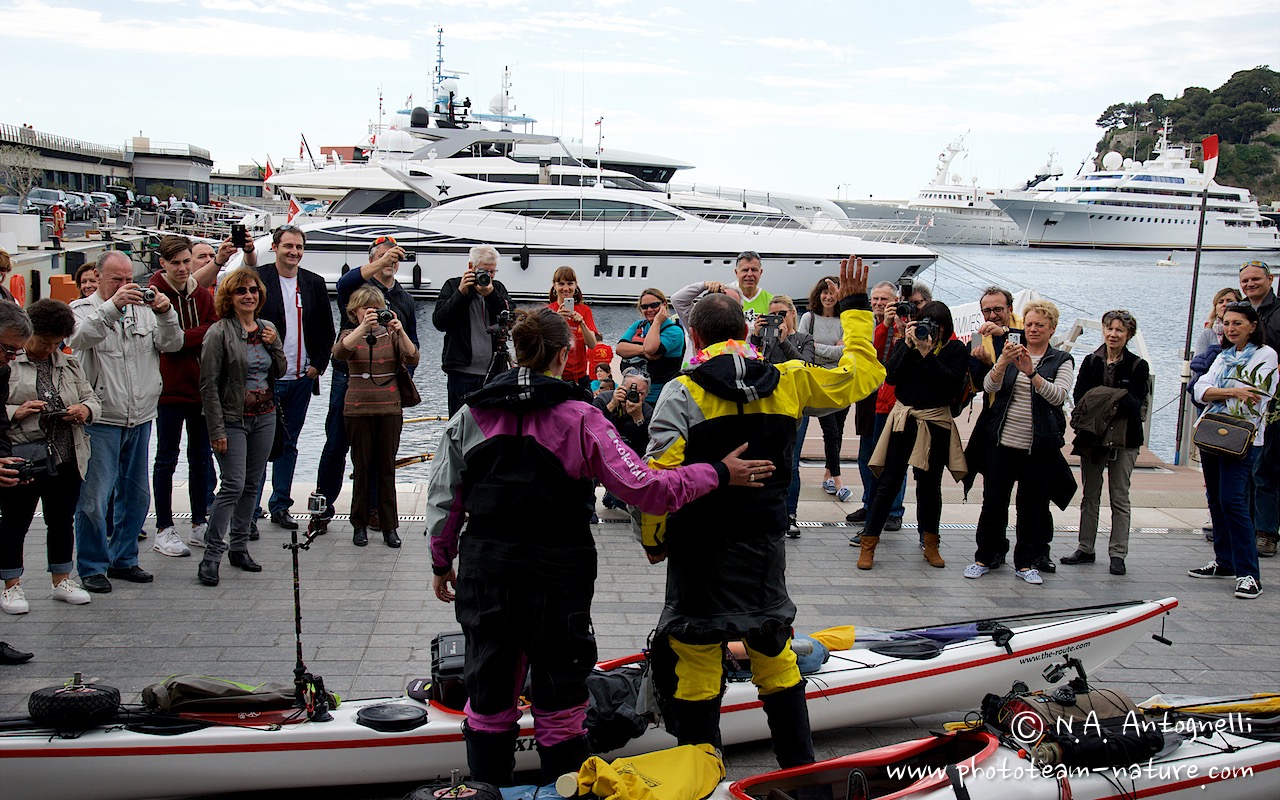 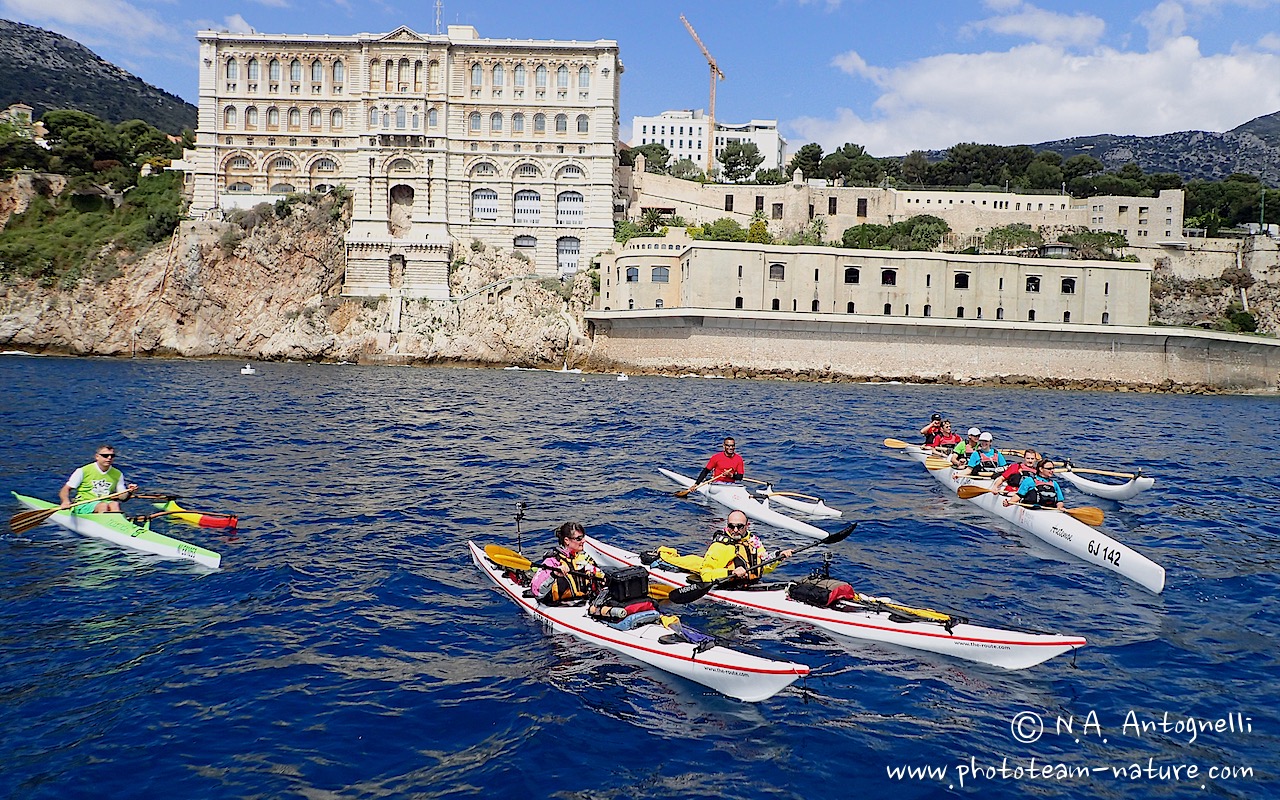 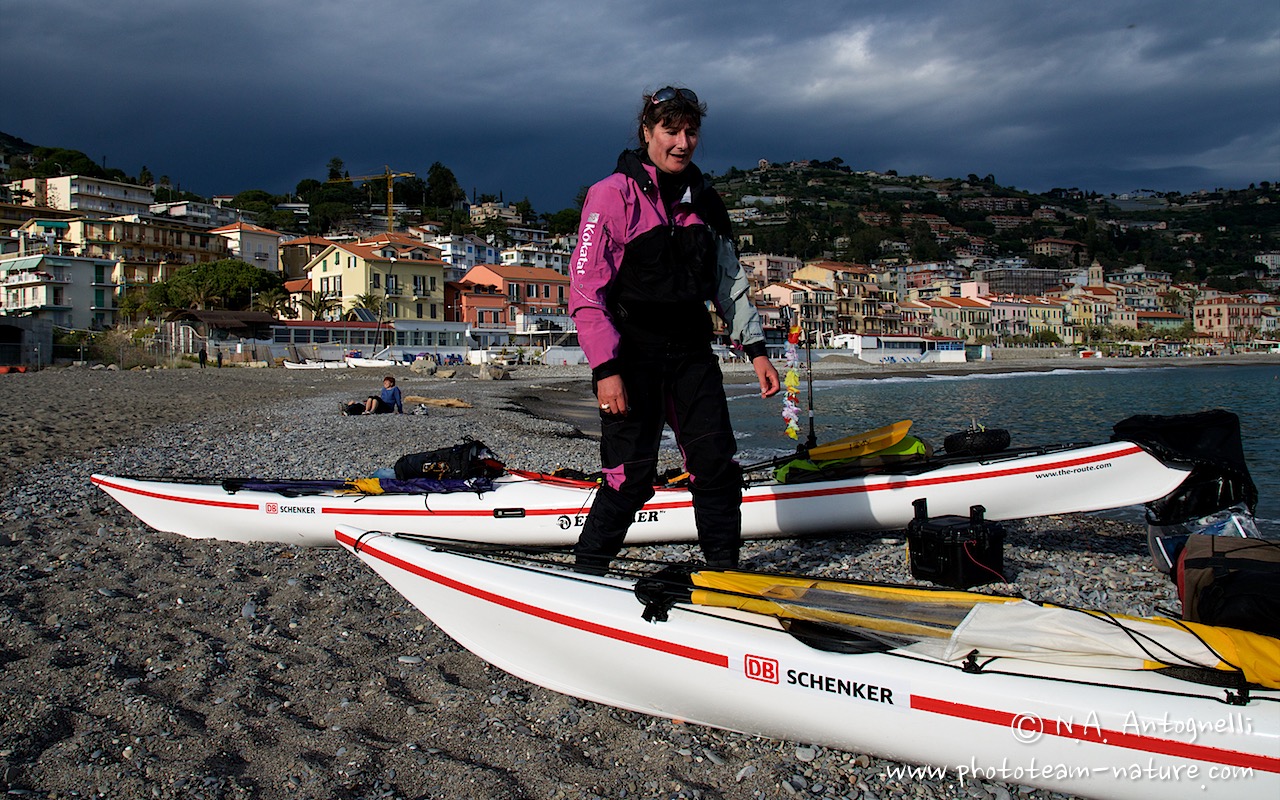 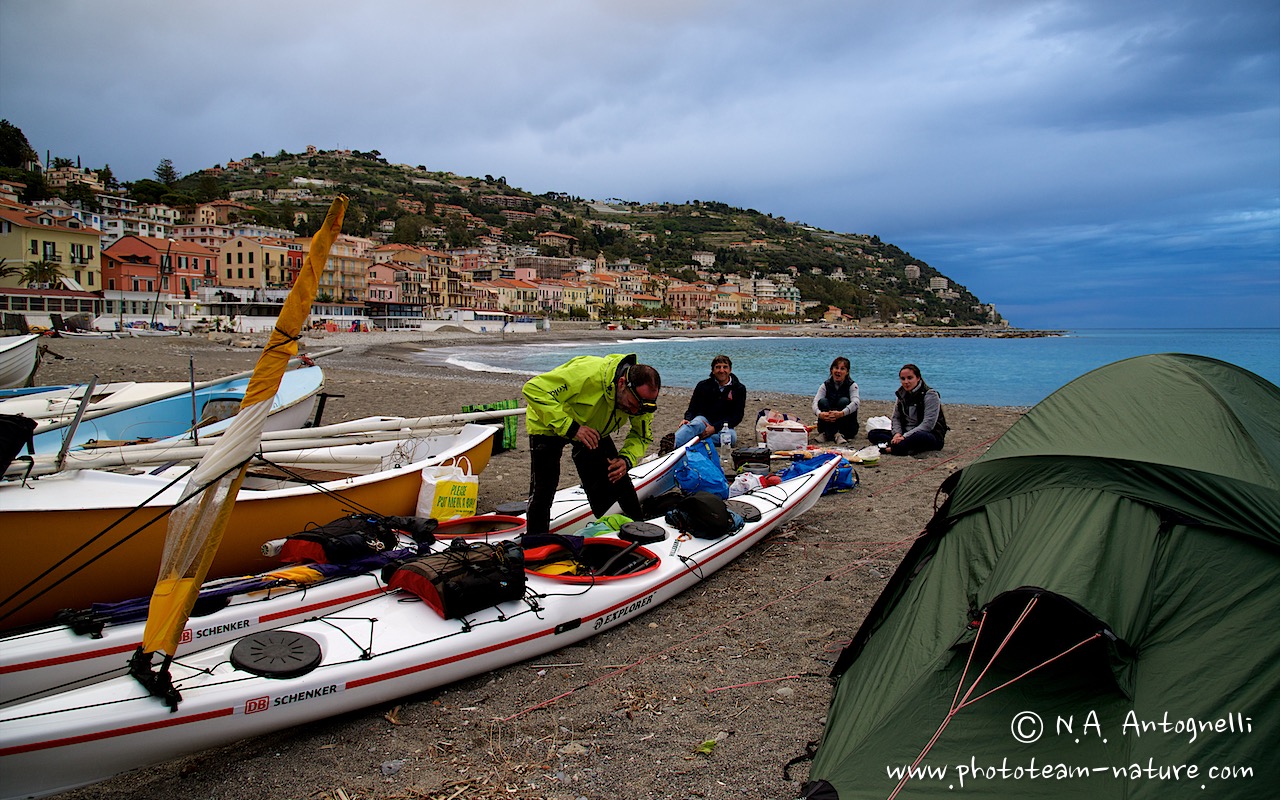 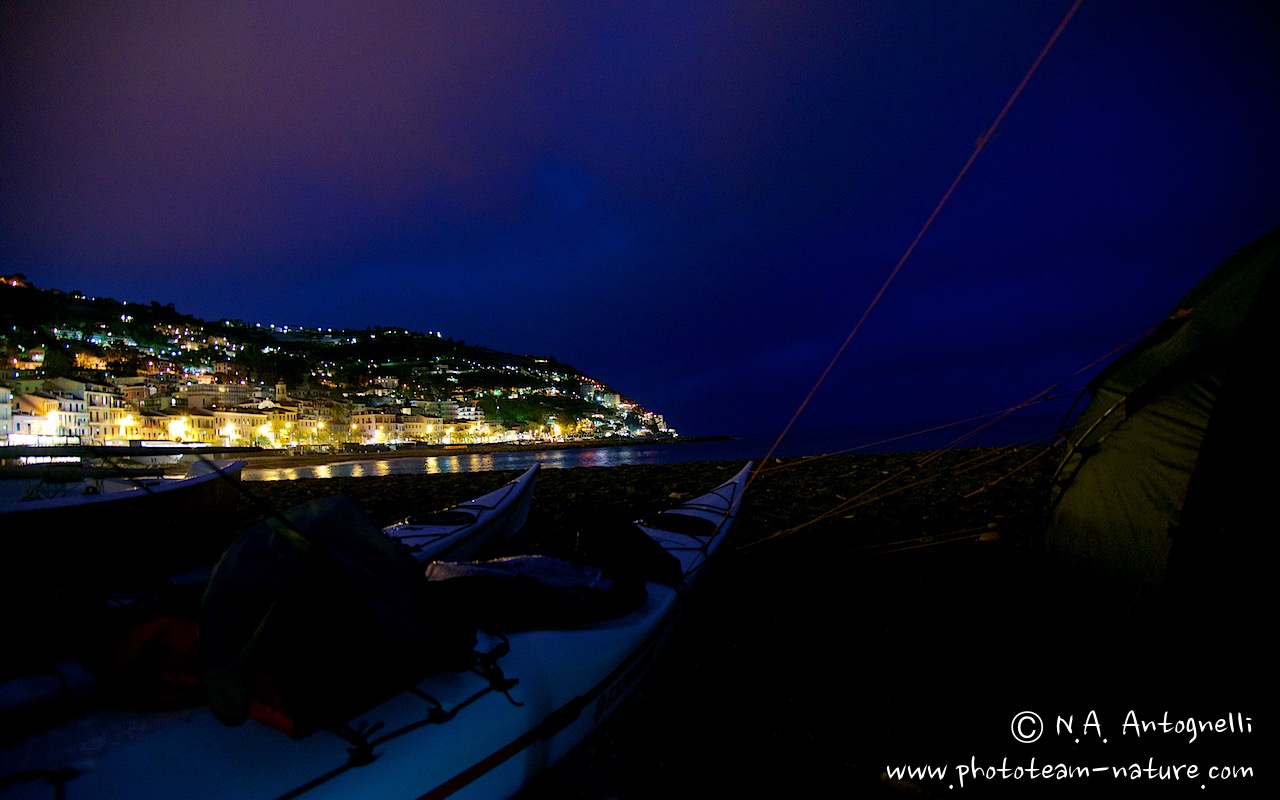 For several weeks, if not months, we have been working on this project. Certainly, it is not the kayak organization which caused us most concern, except for the last two weeks waiting for a good weather window.
For two days, all the indicators are positive. The departure day is now set to Sunday, April 24, 2016.
It was originally scheduled for March 27, my birthday, but by coincidence this is also the day my father is celebrating his 82 birthday party.
It is him, who picks us up this morning and together we turn the key in the lock. This is often one of the hardest time of an adventure, go, do not turn and look straight ahead.
For two weeks the kayaks have been waiting in the boathouse of the new “Société Nautique de Monaco”, just as protected cars in their paddock.
Only a few things have still to go into the waterproof compartments of the two “Explorer.” We arrive at 9:45 am, an hour earlier than the official appointment to peacefully finish the storing, but friends and family do the same. Michèle, our friend, did not hesitate to do 500 km to greet us. My sister has even delayed a christening ceremony to be present. All these acts of kindness touch us enormously.
Now a large group is gathering around us.
We get the kayaks on the dock, under the curious eyes of tourists. This should seem common to them in Monaco, events always happen there …

4 Polynesian canoes “Vai Nui Va’a” coming from the nearby town of Roquebrune, are heading to the pontoons. Their crews came to greet the start of “The Route”. Sophie and Eric call us to give us a gift. As tradition dictates, they pass a necklace of flowers around our neck. What follows is a prayer hand in hand so that the common energy blesses and protect our trip.
After two interviews and many series of photos, we put on our new dry suits. We really feel like being strange animals.
Our friends are helping us to carry the kayaks to the pier drop. Ultimate photos, ultimate hugs, after many months of preparation, a new adventure begins. At 12:30 pm, “Sumut? ” and” Malik quitita” (” Where are you going ? “And” Dancing on the waves, “the two names are in Greenlandic) slide towards the exit of Port Hercule.

“The Route” go!
Escorted by the fleet of Polynesian canoes, the official start takes place at the foot of the Oceanographic Museum. A downwind encourages us to get the sail out which has the immediate effect of alleviating the pressure of our paddles. I had forgotten how a loaded kayak is heavy to move.
So, we cut the Bay of Menton, the prows pointed to the Italian Riviera.
Michel (Searout), our weather router for the first navigation in Greenland 2009, shows a three-day good weather window. However, the forecasts for the Mediterranean Sea are reliable only 48 or even 24 hours in advance. No need to say that we will navigate on visual rules and enjoy all good opportunities.
At 5:30 pm, the first part of the navigation ends to the small town of Ospedaletti neighboring Sanremo. At the counter: 26 km.
The camp is set on the beach, among the fishing boats.
Tonight, we will not be alone. With their sailing boat, Fabrice, Clotilde and Elodie have followed us to the franco-italian border, they are sharing our camp and provide the most delicious Greek dishes . A taste of Greece prematurely. We are even happier when we all have to huddle under the tarp (tarpaulin stretched bivouac) to get away from the rain and watch the lights of the city sinking into the night.
It’s getting late, we hug our friends, and have a thought for all those who have supported us. For sure, they will be our followers. “The Route” is just beginning.

Epilogue: The next day we had planned to reach the city of Imperia but had to find shelter in the port of Sanremo as the wind was too strong, 10 to 15 meters seconds (36 to 54 km / h). After two days onshore due to the wind, we think we can go back to sea tomorrow, Thursday April 28th.
To be continued…
Thanks to all for your support and the interest you show us.